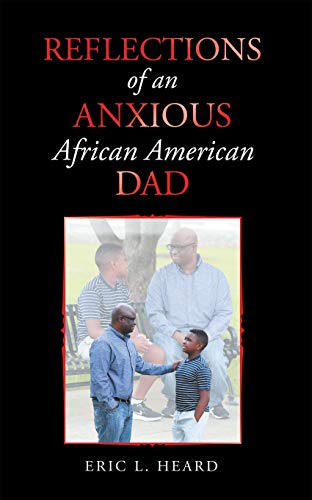 IR Rating:
3.0
Eric L. Heard's REFLECTIONS OF AN ANXIOUS AFRICAN AMERICAN DAD has a touching premise and strong central idea, but too often it tells readers about painful experiences rather than showing them.

At the start of REFLECTIONS OF AN ANXIOUS AFRICAN AMERICAN DAD, Eric L. Heard tells us he is writing the book for his son, to explain the anxiety he has suffered all his life. The narrative begins when Heard finds himself irrationally angry with his son. This inciting incident provides a frame for Heard to show the anxiety behind that anger, describing how it connects with the traumatic legacy of “systematic racism”. As a central theme, this is strong. The book provides a touching picture of a father’s love and his desire to provide the emotional equipment he was not given in his own life.

Eric L. Heard grew up in Florida in the 1970s. His father was often away, serving in the military and his mother lived somewhat cut off from her in-laws. Heard describes these difficulties, detailing how wounded pride could lead to arguments between his mother and his paternal grandmother that left him caught in the middle. He frequently mentions the looming crack epidemic, although we do not see a lot from this period, and the book feels as though it is written in the shadow of this great trauma which will upend so many lives. However, the author’s desire to give a full and fair account doesn’t always work. After confronting a painful memory, Heard often seeks to provide a better one for balance rather than allowing the painful experience speak for itself. Writing about the crack epidemic, Heard writes “the pain was so great that I had to clear my thoughts of it”. Too often, we are told about trauma that is absent from the book itself. In order to understand, we need to be provided with the full picture, however painful.

At some moments, Heard seems to be aware of this problem. In the community where he grew up roaches were so common some people would leave the lights on in the kitchen at night so as not to have to see the creatures crawling around. Rather than solving the underlying problem, this just kept the creatures out of view. He reflects on this: “I came to realize that many issues in our community could have been solved with a little bit of light…. Hiding the problem gives people the reassurance that the problem is not an issue at all, that it’s all taken care of…. Then, at the wrong time and when you least expect it, it… wreaks havoc.” This is a good insight – but there are too many times when the author turns the light of the narrative away from the central issues and onto incidental detail. If he were to describe more of painful things he experienced, readers might feel the need for this self-preservation. Ultimately, he is reluctant to go to the center of things. The text could also benefit from a copy-edit and chapter titles, which might provide greater narrative shape.

Eric L. Heard’s REFLECTIONS OF AN ANXIOUS AFRICAN AMERICAN DAD has a touching premise and strong central idea, but too often it tells readers about painful experiences rather than showing them.

REFLECTIONS OF AN ANXIOUS AFRICAN AMERICAN DAD by Eric L. Heard is a brief but powerful memoir of an African American father’s motivations–rooted in his childhood experiences–for having an overbearing approach to parenting. The author’s conversational tone is inviting, and he conveys his insights with blunt honesty.