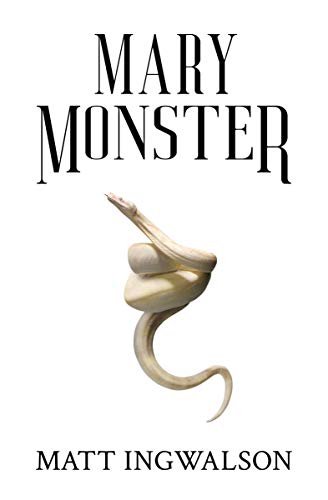 IR Rating:
4.5
An interesting premise and a well-done presentation wrapped in a horror novel, MARY MONSTER is an engaging, fun and thoughtful critique of the creative process and relationship between artists and inspiration.

MARY MONSTER is a horror title, anchored to Mary Wollstonecraft Shelley, perhaps the first horror novelist and author of Frankenstein.

Writing a horror novel that plays off a seminal classic of the genre is a huge risk, but Matt Ingwalson does more than a credible job of pulling the feat off in MARY MONSTER. Rather than focus on her most famous literary work, Ingwalson instead brings Mary Wollstonecraft Shelley forward as both monster and creator.

The story is unveiled through the eyes of Otis Oliver, a music critic who’d stumbled upon an occult murder scene as a child in England in the 1970s. Comfortably rich and nearing retirement age, Otis lives in the resort towns of Colorado, where he creates webcasts discussing indie rock-and-roll. That is until he sees a Denver newspaper article showing a fresh murder scene almost identical to the one in his memories.

Seeking answers, Otis enters the Denver art scene and almost immediately stumbles on Mary, a mysterious art patron who seems to know him. Quickly, we discover that Mary is indeed the author of Frankenstein. Immortal, thanks to her murder and revival by her husband and their circle of literary and scientific notables, Mary seduces Otis and makes him her confident and assistant. We find that Mary, easily bored, has been performing a ritual every 40 years or so. Each gruesome murder unleashes both a literal storm as well as an artistic surge. The creative energy behind the punk rock eruption of the 1970s was the direct result of Mary.

The most recent ritualistic killing, the sixth of Mary’s macabre career, has imbued seven fresh new talents that Mary fosters and sends forth to revitalize and renew the artistic world. Only problem is, someone or something is killing off Mary’s proteges, just as they begin to rise in prominence. Otis is caught in the middle—does he support his lover Mary, or the shadowy group that seems to be in opposition?

The pace and plotting is brisk and the characters are well drawn. The affectation of an accent from Otis’ Manchester childhood seems a bit distracting early on, but the author lets it fade away relatively quickly. Describing the mood and tone of MARY MONSTER is difficult, although set in the modern day, the styles and feel often harken back to early 19th Century conventions. Not nearly as dismal and dreary as the works of Mary Wollstonecraft and her contemporaries, there is menace and darkness enough.

An interesting premise and a well-done presentation wrapped in a horror novel, MARY MONSTER is an engaging, fun and thoughtful critique of the creative process and relationship between artists and inspiration.