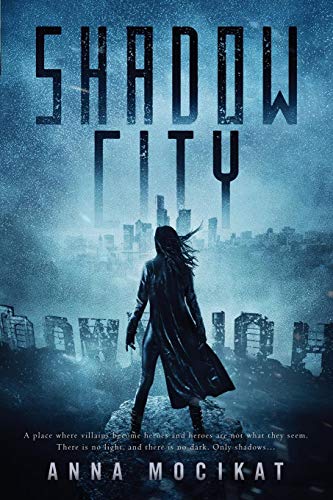 IR Rating:
4.0
SHADOW CITY is full of adventure, thrills, and twists and turns. The characters are fully realized and the swift pace keeps the story moving along, so readers will likely find themselves turning pages in rapid succession.

SHADOW CITY is a post-apocalyptic adventure that will captivate readers of fantasy, science fiction, and dystopian novels.

Thirty-three years before, humanity experienced the end of civilization in what survivors call “The Glitch”. The Glitch not only destroyed civilization, it also shifted reality and created a rift between this dimension and another, darker one. The world that emerged after The Glitch is a world previously unimaginable to humanity.

Now, in post-apocalyptic Los Angeles, survivors fight to stay alive. Those who remain must scavenge the ruins of the once-vibrant city, where the fear of radiation keeps them contained. Unfortunately, survival does not come easy in SHADOW CITY. Food and supplies are scarce, and threats come from every avenue located outside the safe zone. Vampires, mutants, cyborgs–and worse–roam the streets. Some of these creatures aid human survivors, but many only seek to destroy them.

As the novel begins, the reader meets Jean and Louis, siblings who scavenge the ruins of LA in order to stay alive. When they encounter a nameless stranger with no memory of his former life, they bring him to safety. Little do they know this stranger will have a powerful impact on the fate of humanity. But who is he? And from where did he come?

Jean, Louis, and the stranger–along with members of the Human Force, who protect the safe zone and those who live within it–must navigate this dangerous world and stop the dark forces that seek to destroy the remnants of humanity. But just who are the villains? And who are the heroes? Anna Mocikat keeps readers guessing until the end.

At times, the writing is a bit stilted, but these moments are rare and quickly obscured by the action of the novel. Readers should be aware that SHADOW CITY marks the first novel in a planned trilogy; while the novel does not end with a cliffhanger, not all threads are tied up at the end. That being said, SHADOW CITY boasts a unique and entertaining storyline, so readers who enjoy it will surely not mind waiting for the second installment.

SHADOW CITY is full of adventure, thrills, and twists and turns. The characters are fully realized and the swift pace keeps the story moving along, so readers will likely find themselves turning pages in rapid succession.