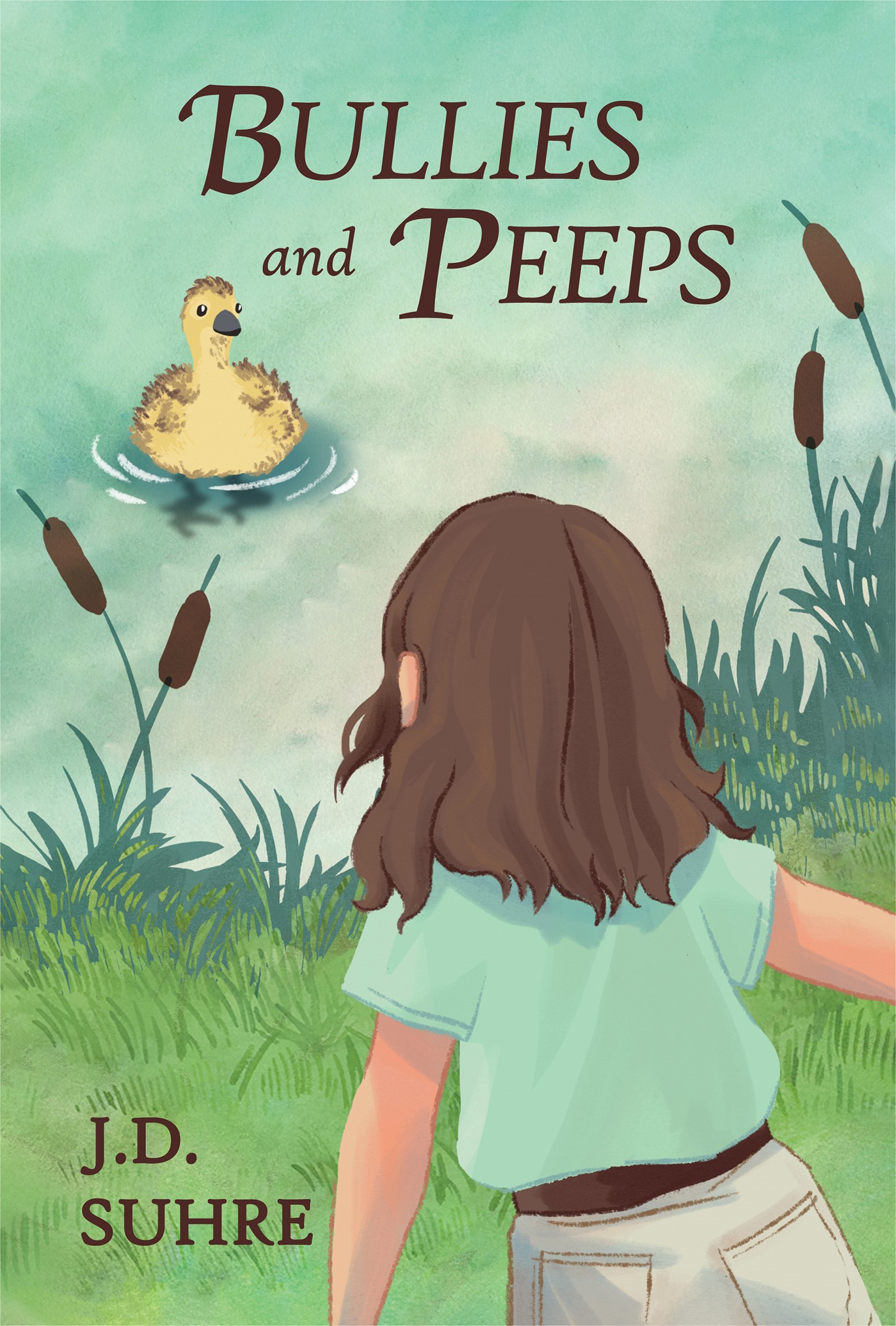 IR Rating:
4.0
BULLIES AND PEEPS by J.D. Suhre takes a dive into the troubling issue of adolescent bullying. Told from the alternating viewpoints of the perpetrator and the victim, this morality tale of schoolyard cruelty and redemption delivers important messages about courage, character, ecology, and friendship that all young people would be well-served to hear.

Meg is considered an outcast in accordance with the dictates of the fifth-grade social scene. That's okay with her until the leader of a catty clique of mean girls plans to make her not-so-great life even more dismal. But a nest of goose eggs is about to change all that.

Not big on primping and popularity, Meg naturally falls on the “outcast” spectrum in accordance with the dictates of the fifth-grade caste system. And that’s largely okay with her until a catty clique of mean girls, led by the meanest but prettiest girl of all – Hannah – puts a series of plans into motion to isolate Meg and make her not-so-great life even more dismal. When Meg calls Hannah out, the bad feelings fester and lead Hannah to fantasize about ways to ruin Meg’s relationships with anyone and anything. She sets her plan in motion at summer camp, luring Meg’s only friend, Alexis, away with promises of the popularity and prestige of belonging to the “Fierce Five.” In testament to the shallow appeal of such things to social climbing adolescents, Alexis proves to be an easy recruit. Meg is hurt, but it’s just the first in a line of wounds and indignities that Hannah and crew inflict upon her. Hannah won’t be satisfied until Meg is completely defriended and dispatched to another class. But neither girl figured on a nest of goose eggs to not only provide Meg with a new interest to dull her pain, but to eventually upend the evil Hannah’s strategy to permanently discredit Meg in the eyes of all her classmates.

As Hannah relishes opportunities for shooting her verbal poison darts, she dubs Meg “Goose Girl” and convinces her posse that the bullying is fun and deserved. When suspicious teachers try to get to the bottom of things, Meg is tight-lipped and the secretly gleeful Hannah proclaims her innocence. When a classmate, Jack, befriends Meg and encourages her to stand up to the bullying, Meg has troubling finding the wherewithal to defend herself. The geese in BULLIES AND PEEPS are a literary device effectively used by author J.D. Suhre to metaphorically reflect Meg’s own struggles. And Meg draws some analogies of her own. After learning about the threatening and disagreeable side of goose behavior, Meg compares them to her tormentors. And when the last of the hatchlings emerges as a runt, a mutual connection is formed between herself and the little fellow she names “Garrett.” There are lessons for each about finding the courage to stand tall and fly in the face of challenges.

The author’s choice to alternate the telling of the story between Hannah and Meg allows readers to see both sides of the story. Not only does it reveal the character of each girl, but it provides some insights into the dynamics of this particular bullying situation. From Hannah we learn that she is a rich, entitled kid who is pretty and popular. We likewise learn that Meg comes from more modest means, has far fewer friends, and is considered an outcast. The problem is that both are old stereotypes. Research has shown bullying to be an equal opportunity malady in which degradation is meted out and received across socioeconomic levels by “cool” and “nerdy” kids alike. Far more significant to this story are Hannah’s hunger for more attentive parents and Meg’s dealings with her caring, clueless, and somewhat overbearing mother. Foregoing the clichés and digging deeper into family influences would have made a stronger, more relatable case for Hannah’s quest for power and Meg’s disbelief in her own.

BULLIES AND PEEPS by J.D. Suhre takes a dive into the troubling issue of adolescent bullying. Told from the alternating viewpoints of the perpetrator and the victim, this morality tale of schoolyard cruelty and redemption delivers important messages about courage, character, ecology, and friendship that all young people would be well-served to hear.

BULLIES AND PEEPS by J.D. Suhre is a tale that introduces young readers to Meg, a 5th grade student who seems to be on the outside looking in when it comes to fitting in with her classmates. The story, told in two different points of view, is a thoughtful and sometimes humorous reminder for parents of their own school days and provides a subtle message of children respecting each other’s differences.