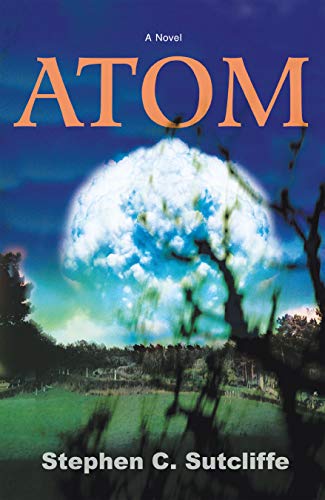 IR Rating:
1.0
ATOM aims for deep religious allegory, but has neither the skill or wit to pull it off. The result is a jumbled mess of fake anti-heroes, hate-filled characters hellbent on committing hateful acts.

ATOM is about The Children Of Atom, a group of spoiled rich kids who long to rock out, get high, and start society’s collapse by detonating a homemade nuclear device.

ATOM, by Stephen C. Sutcliffe, is difficult to classify. On one level, it’s a heist story about angry young men stealing materials to make a nuclear weapon. On another level it is an adolescent rock ’n’ roll fantasy. ATOM is a meditation on modern terrorism and America’s use of atomic weapons in WWII. It’s a religious allegory. It’s a hate-filled political manifesto.

Whatever you call it, ATOM is an unpleasant reading experience.

ATOM is about The Children Of Atom, a group of spoiled rich kids who long to rock out, get high, and start society’s collapse by detonating a homemade nuclear device. They’re all, like, super geniuses, so all they need to do is steal plutonium (Maybe? Sutcliffe keeps calling it “the isotope”) and whip up a bomb, brah!

Along the way, the Children Of Atom drive fast cars, tool around on motorized hand-gliders (emphasis on ‘tool’), and host massive parties where, of course, their awesome heavy metal band wows all the dude-bros and woos all the chicks. Portions of this novel read like Jeff Spicoli’s surfer fantasy in Fast Times At Ridgemont High only it’s not played for laughs. Even before these characters start spouting racist nonsense at the novel’s three-quarter mark, you kind of hope the Children of Atom all die of radiation poisoning before they complete their dirty bomb.

The plutonium heist is a genuinely exciting action sequence. The rest of ATOM is weird alternative-history lessons trying to pass as dialogue and unnatural character behaviors. (Why is Michael suddenly roller skating with a beautiful girl? Why did he spend a night in the rain by a lake?)

LACK OF A HERO — The premise of ATOM is interesting. What if a group of misanthropic, school shooter-types get their hands on a nuclear weapon? But relatable characters make stories work, and ATOM is full of self-centered, elitist assholes. There’s no one to root for in ATOM, no hero, anti- or otherwise.

CONVOLUTED LANGUAGE — Leave the thesaurus on the shelf and use clear, concise language. Some of the sentences in ATOM are so bizarre they are nearly incomprehensible. Characters don’t fall asleep, they “drift into supine vacuity.”

BAD EDITING — Adding extra exclamation points at the end of your sentences don’t make them better! Honest!!! Also, go bold or italic … not both!

ATOM aims for deep religious allegory, but has neither the skill or wit to pull it off. The result is a jumbled mess of fake anti-heroes, hate-filled characters hellbent on committing hateful acts.

A Message from IR on COVID-19

First, we want to assure our readers that there is no better time to escape with a great book and IR has you covered.

To our authors we want to say that now is a perfect time to get your books in front of readers, partially because books are one of the few things people are consuming at the moment.  Our reviewers continue to be fair and constructive, and we look forward to things going back to looking a little less dire.  And if you happen to be working on something new, now is a great time to move forward.

Thoughts and prayers with first responders, medical staff and those with families and friends affected.