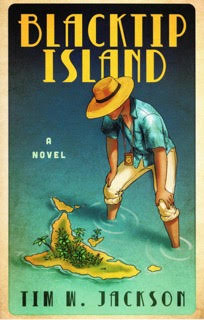 IR Rating:
4.0
BLACKTIP ISLAND is a fun adventure with a motley crew that can easily become addictive - for better or worse - since there is far more to each character than meets the eye.

A stockbroker embezzles funds and escapes to a Caribbean island where he becomes a divemaster to avoid arrest from U.S. authorities in this adventurous story.

A stockbroker embezzles funds and escapes to a Caribbean island where he becomes a divemaster to avoid arrest from U.S. authorities in this adventurous story.

Mediocre stockbroker Blake Hugh Calloway drops his lackluster career and former life when he unintentionally embezzles funds from his work. Thinking he has a future and escape, he travels to Blacktip Island, changes his identity, and becomes a divemaster to amalgamate. On Blacktip Island, he soon finds out he is not the only islander with secrets. He becomes trapped in a spider web of alliances with wack-jobs, two-timers, tree-huggers, control freaks…and a medieval lit-lover. In this action-adventure novel, everything from backstabbing buddies to difficult dives challenge Calloway as he seeks a way out of his felonious status in his own naive, amusing way.

BLACKTIP ISLAND begins in such a way – with main character Calloway and pretty bartender Mal – to suggest the novel is going to follow a typical rom-com adventure format. He likes her; she likes him. But he’s hiding something; but she’s hiding something. Much like in the progression of an Indiana Jones movie, one expects a love story to unfold. But this story goes beyond love. In fact this is a story of deception, greed, and entangling alliances. Love isn’t necessarily true love on Blacktip Island. Also unlike Indi, Calloway – although adventuresome as a divemaster – is a great deal more nervous and naive – more like Indi around snakes – but like all the time. Calloway’s awkwardness and constant paranoia is what makes his character so interesting to witness. He is constantly aware of how suspicious he comes across – perhaps to the point of obsession.

Apart from Calloway, the other characters are equally well-crafted and bold. Although they all have their own flaws just like Calloway’s naivete, their shining moments of goodness still make them likeable. With several likeable characters it’s hard to choose whose side is best regarding the future of Blacktip Island (i.e. industrialization), a debate that is held throughout the book. The lines separating villain and hero are significantly blurred in BLACKTIP ISLAND.

Jackson writes on par with literature, and his novel can be studied beyond its well-crafted plot. For instance, one of the most notable literary elements is his use of theme and symbolism. Calloway keeps a chess pawn with him through the course of the novel. Literally at the beginning of the book, it is a weight in his pocket. This weight on him symbolizes his position as a pawn to the other islanders, and the significance of the chess piece lasts till the very end of the novel. That’s just one instance on how his material can be read on a higher level.

BLACKTIP ISLAND has great characters and writing to boot, but it lacks is a clearly defined tone and confidence in audience awareness. Regarding tone, at some points in the novel, it is very dark and serious, and altogether quite different tonally than the book suggests with its genre. That is not to say that dark and serious is a bad direction for the novel, but the gloomier moments do stick out. Secondly, the narrative tends to over-explain Calloway’s thoughts, which suggests a lack of confidence in the audience to deduce what Calloway is thinking based off his actions alone. Regardless of these critiques – Jackson still has a strong authority and voice in his writing to make BLACKTIP ISLAND an entertaining and engaging read from beginning to end.

BLACKTIP ISLAND is a fun adventure with a motley crew that can easily become addictive  – for better or worse  – since there is far more to each character than meets the eye.